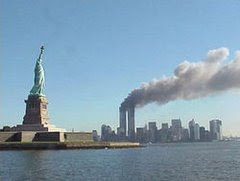 There can be no doubt that those who carried out the attacks on 9/11 did so believing that they were doung the will of Allah.

There can be no doubt that they were believing the teachings of the Koran.

There can be no doubt that they were Muslims.

If you are in doubt regarding these statements, then read the Koran for yourself.  It is freely available here:

Number killed in attack on New York, in the Twin Towers and in aircraft that crashed into them: 2,823

Number of people who died when American Airlines flight 77, from Washington to Los Angeles, crashed into the Pentagon: 64

Number of peole killed in the Pentagon: 125

They shall grow not old, as we that are left grow old:
Age shall not weary them, nor the years contemn.
At the going down of the sun and in the morning
We will remember them.

Please add this icon to your website, and link it to this blog. See the HELP! page for instructions.

Let us do what we can, with our time, our effort, and our material wealth, to make this counter stop incrementing.

The light of the candle is a reminder that we must not hide our own light under a bushel. In the words of Sir Isaac Newton: "And when thou art convinced be not ashamed to profess the truth." Remember this when next you light a candle.

Just an ordinary chap who is in despair regarding the future for my country Britain. Despair led to despondency, as the full horror of what is unfolding has become ever more apparent. But why should we be despondent and inactive? Let us at least do something, so that if a particular course of events unfolds, I (and you if you are able to assist) can look the next generation in the eye and say "We did what we could do." I do believe that the pen is mightier than the sword. We must use the pen wisely and actively, if we are to obtain a genuine peace in Britain, and indeed in the world. If not for our own sake, for the sake of the next generation. They do not deserve to live under Sharia law. I am not now nor have been previously a member of any political party. It will require that the members of all parties to understand what is before us, and to act in the best interests of civilisation and democracy.